In the second article on WoltLab Suite 5.5, we will focus on the revision of primary and secondary buttons on pages and ignoring threads.

Revision of the Buttons for Additional Functions

Pages offer additional functions via subtle icons that are placed next to the breadcrumbs. This has several drawbacks: These icons are easy to miss for new users and because of the lack of labels they are often difficult to interpret. In the mobile view, these buttons were moved into the menu and are thus easier to understand, but conversely not immediately visible.

Apart from the icons next to the breadcrumbs, the number of action buttons (for example, “New Thread”) has also increased with each version. With the introduction of the “Official posts” function, for example, a button was added that redirects to the first official post. Having too many buttons makes it difficult to find the right one, especially for new users, and can quickly lead to frustration.

We have addressed these issues with WoltLab Suite 5.5 and have thoroughly redesigned both the breadcrumb menu and the action buttons, introducing a new location for both types of buttons. The action buttons have been reduced and there is now only a maximum of one large primary button on each page. The remaining buttons have been moved directly below these action buttons and visually reduced in size. Actions that are used more frequently are displayed as distinct buttons and other actions that are not used as frequently are displayed in a separate drop-down menu “Show more”. This makes these buttons way more easily accessible and noticeable both on desktop and on smartphones or tablets alike. 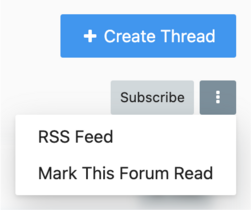 In larger forums, there are often a few threads with a lot of activity that keep popping up in the recent activities or increase the number of unread threads. It is perfectly normal for users not to want to read all the threads. It is all the more annoying when a certain thread keeps getting pushed to the front even if you don't want to read it. In the past, it was already possible to hide entire forums. With the upcoming version, it is now also possible to specifically ignore individual threads and thus not only filter out the thread from the unread threads, but also hide all activities from these threads.

No notifications will be generated for mentions or quotes in an ignored thread. The existing “Users can ignore this forum” feature complements the feature to the extent that threads from forums that cannot be ignored cannot be ignored either. This ensures that important information, such as crucial announcement thread, does not go unseen.

We have also taken this feature as an opportunity to completely replace the thread subscription dialogue with a new drop-down menu. This makes selecting the thread status (“Subscribed” or “Ignored”) easier and more intuitive for the user. 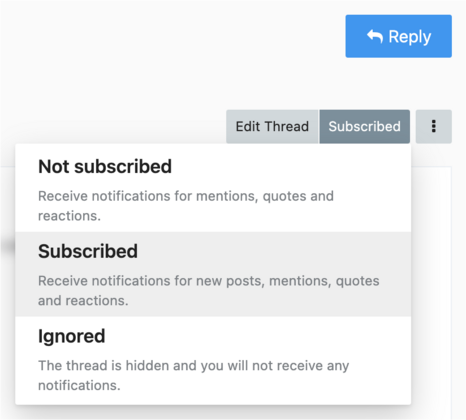 Subscribing to forums has so far ensured that one is reliably informed about new threads in the forum. However, to receive notifications about new posts in the forum, it was necessary to subscribe to these threads separately. Especially when subscribing to existing forums, it was very tedious to subscribe to all threads already contained in order to receive corresponding notifications.

With the upcoming version, we offer a solution to this dilemma in the form of an additional option for forums: subscribing to forums and threads in one forum. This means that the subscriber will thus not only be notified about new threads, but also about new posts in the threads of the forum. At the same time, we have also adapted the UI here and placed the selection of the

status in a drop-down menu to make it easy for the user to make a selection.

Forums can be ignored and thus hidden via the “Forums on / off” function, but this feature had been very hidden on the forum home page in the breadcrumbs. Due to the revision of the UI of the forum subscription, there is now also the possibility to accommodate another button. It is therefore only logical that forums can now also be ignored via the drop-down menu. This also offers the advantage that the feature now behaves analogously to the new “Ignore threads” feature. 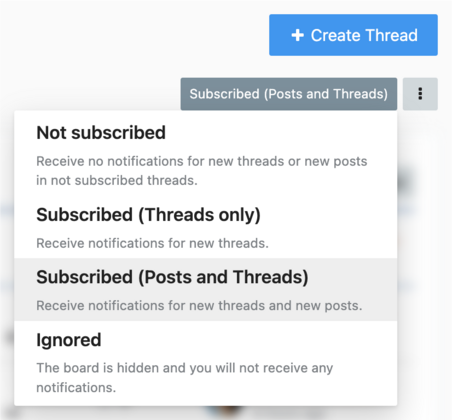 The selection of the “Best Answer” in threads has become an important and well received feature for users. This is intended to help third parties find the answer to their question, especially in more complex and longer threads, and thus orient themselves in the thread. The feature “Mark threads as done” provides visual clues and filter capability to easily recognize questions that have not been (fully) answered yet.

However, as soon as a best answer has been marked in a thread, the thread is usually resolved for the user. Therefore, it is only logical to mark the thread with the Best Answer as Done. This convenient automation avoids the hassle of doing it manually and keeps the list of unresolved threads clean.

Users often register in forums to ask questions. It is all the more frustrating when the new user cannot find a way to open a new thread and gives up after some searching and eventually leaves the site to look somewhere else. To make it easier for new users to open a thread, there is now a global “Create Thread” button on the forum list. As soon as this button is pressed, an overlay opens with the selection of the desired forum. As soon as the forum is selected here, the user is redirected to the “Create Thread” form for the corresponding forum and can thus ask their question quickly and easily.

In this third article on what‘s new in WoltLab Suite 5.5, we‘d like to focus on the overhaul of the search form, search results, and Elasticsearch integration.

In the fourth article on WoltLab Suite 5.5, we introduce the live update and explain what it is all about and what advantages it has to offer.

WoltLab Suite 5.5 again contains numerous smaller “quality of life” improvements, which we would like to present in more detail in this article.