Attention: Unfortunately no support at the moment. Reduced price!

Warly Boxxer is the ultimate extension to WoltLab CMS. Operate the Box-System with ease and in a completely new way.

Warly Boxxer fits seamlessly into the existing box system of WoltLab CMS and extends it with practical functions.

Since Warly Boxxer is an extension of the box system, the existing boxes and settings are preserved.

The separation of Text, HTML, Template and System boxes is removed with Warly Boxxer. System Boxes are now displayed on the same level and can be selected directly when adding a new box: 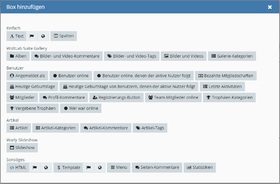 This eliminates the two-step process. The system boxes are grouped and easier to identify by icon. The box types Text, HTML and Template are blend with the System box types together and only differ for multilingual websites in that you can decide whether the box is to be created monolingual or multilingual.

This change also applies to the box list. Here, too, the box type is displayed directly instead of just showing "System":

Instead of displaying a pure list of available boxes as before and being able to define the order of the selected boxes separately, a grid of all positions and selected boxes is displayed.

Within this grid, boxes can be moved, added, deactivated, edited or deleted as desired.

So you can see directly where which box is located and thanks to the practical preview for many boxes you also get an overview of the contents of the boxes.

Moving the boxes is done easily via Drag'n'Drop. With Warly Boxxer boxes are no longer bound to their predefined position, but can be dragged to any position they support. Positions that are not supported are greyed out.

If you want to add a box at a certain position a marker with a plus appears.

Clicking on the marker opens an extended Add Box dialog. Here you can decide whether you want to add an already created box or create a completely new box.

Using practical filters and a text search the desired box can be found in no time.

If you want to create a new box, only the box types that are allowed at that position are displayed: 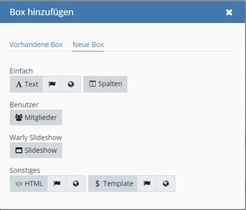 Warly Boxxer provides a seamless workflow, so you don't have to worry about saving, going back, picking items from a list or the like. For example, if you edit a page and want to add a box, Warly Boxxer automatically saves the page and jumps to the Add Box form. When the form is submitted, the box is created, inserted at the desired position and you are returned to the page form of the previously edited page.

Even with newly created pages, boxes can be added, moved and edited directly.

If you come from another form Warly Boxxer shows a button to go back easily. So you never lose your orientation.

• Several identical boxes on one page

Instead of placing each box only once on a page, Warly Boxxer allows you to insert the same box as often as you like. So you can have a box at the end of a page as well as in a sidebar or you can have a certain image as a separation between paragraphs without having to create the same box over and over again.

If you want to create a new box, the box type "Menu" will be displayed directly in the add box dialog. You don't have to go to the separate "Menus" menu item anymore. In addition, the first level of the menu is displayed as a preview. Beside the "Edit Menu" button there is also a "Menu Items" button that takes you directly to the menu items.

Via the configuration you can set whether the main menu should also be displayed in the box grid. So it is always accessible and you get a complete overview of the page.

To further increase flexibility, Warly Boxxer comes with the practical "Columns" box. With this box you can create 1-12 columns and position boxes horizontally. For each column you can define which position it should "imitate". This determines the allowed boxes within that column. 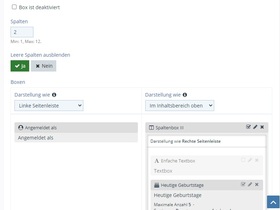 Also the "Columns" box integrates seamlessly into the box grid and allows to move boxes between page and "Columns" box as desired.

If you create a "Columns" box with only one column you get a practical container in which you can group boxes and place them on several pages.

"Columns" boxes can also be nested in each other.

If boxes are allowed in articles and which positions should be displayed in the form can be set in the configuration. 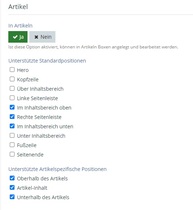 Boxes can also be inserted via the new BBCode "Box" in the WYSIWYG editor. It can be selected whether the box should take up the entire width, be displayed left/right in the text or centered. In addition, a width can be specified. 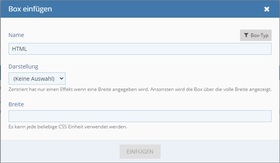 • Integration into own forms

Warly Boxxer can not only be used for pages or articles, but also offers a comprehensive API to bring the box system into your own data sets.

Create your own layouts, determine which box types are allowed and/or prohibited on a position and unleash the possibilities of the box system.

• Integrate your own boxes seamlessly into Warly Boxxer

By default, only previews of text, HTML, template, menu and box controllers derived from AbstractDatabaseObjectListBoxController are displayed in the box grid. Unknown boxes also show a default icon and are displayed in the group of their own package. However, by optional methods in the box controller boxes they can be integrated into Warly Boxxer in the same way as the "Columns" box or the boxes of the WoltLab Suite.

The API to Warly Boxxer can be found here.