We have received a lot of feedback regarding the anti-spam measures, moderation system and access to the comment system for guests. We want to introduce some handy changes with Burning Board 4.1 which aim to improve the current experience and to properly handling guests and abusive members.

Improvements to the report and approval management interface 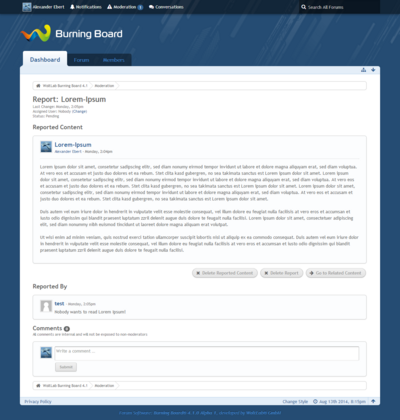 The overall page has been cleaned up to provide a better overview on the individual case, including a cleaner separation between the reported content and the reporter. Next we've tuned the status field, it will now display different values depending on the action that has been taken, e.g. the report was justified and the content has been deleted. We have removed the previous comment input field and replaced it with the comment system, allowing for a better communication between involved moderators and being able to track down the thoughts and arguments that led to the final decision at a later point.

Assigning a user has been also improved, clicking on the link (Change) will open an overlay, allowing you to quickly assign it to yourself or to nobody, reverting it to the Pending state. The third option allows you to specify the username to assign it to them, the system will reject any user that does not has access to this moderation queue due to insufficient permissions.

The report system has been extended to allow for a new type of "content" to report: A user's profile. This is primarily intended to cover the shortage when a user wants to report an offending signature, avatar or his/her about me text.

One more thing regarding the moderation system, it is now possible to suspend users, avatars and signatures for a specific time, instead of just suspending it indefinitely.

Burning Board 4 offers three different measures against spam bots which has proven to successfully block almost all automated bot registrations so far. These measures are preventing automatic registrations, but cannot entirely keep humans away which manually register themselves in order to annoy you and your community with spam. We have been working on a more flexible anti-spam system which allows for arbitrary measures to be used as a replacement for the well-known ReCAPTCHA. The system will now offer you to provide custom questions which have to be answered by the registering user, you're not restricted to dumb question like "What is 2 + 5" (a bot can copy and paste them into Google and it will yield the answer), instead you can define anything you want including flexible answers to cover spelling errors. 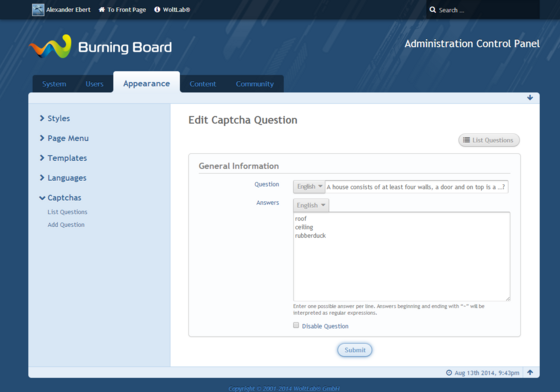 Sometimes you do want to prevent registrations from other types of users, more specific under-aged people. Starting with Burning Board 4.1 you can specify the minimum age a potential user must have reached to be able to register themselves. The user will be prompted for their birthday during registration.

There are two major suggestions which we will be fulfilling with Burning Board 4.1: The ability to provide multi-line comments and to grant guests the right to comment on content, e.g. blog articles.

A small hint for those who like shortcuts, pressing Ctrl + Enter will submit the comment. Or you could just hit the button. 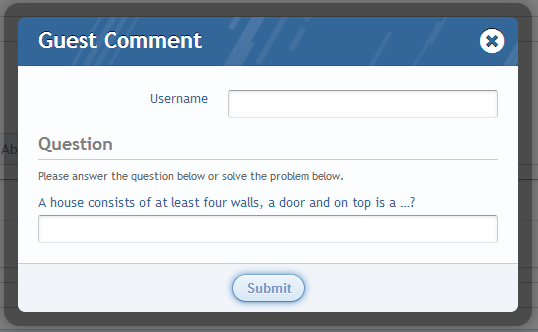 Next is the ability for guests to write comments, previously the system denied guests from using it due to technical limitations. Starting with Burning Board 4.1 guests will be able to comment, depending on the permissions granted for them. Once they attempt to submit a comment, an overlay will be displayed which prompts them to provide a username and to solve the anti-spam measure. The screenshot above showcases the question and answer feature, it is worth noting that using question and answers is not required if you wish to stick with ReCAPTCHA.

This site uses cookies. By continuing to browse this site, you are agreeing to our use of cookies. More Details Close